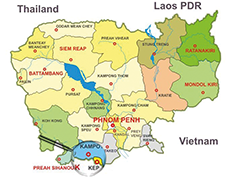 Kep City is a municipality with the province status, just a few kilometers from the border with the Vietnam (around 30 kilometers). Easy to find a transport to go to Hatien (Vietnam), it is there that the boats leave for Phu Quoc Island (you could see this island from kep beach). The cost from Kep to Phû Quoc is about 20$/pers many agencies in town sell tickets (no direct line by boat from Kep to Phû Quoc island).

Located to 170km south from Phnom Penh, is it the smallest province of Cambodia with 336km2 for, approximately 40,000 population. From Kep to Kampot 26km, to Sihanoukville 130km, to Phnom Penh 17km.

About of the History...

Founded as a seaside retreat for the French elite in 1908, Kep (sometimes spelled Kaeb) fallen in the 70’ to the Khmer Rouge period. From that period stands today these decaying shells of modernist mansions, now entangled with forest, stand as relics from another age that met a sudden and violent end.

Reborn from its ashes, «the quiet city» became a pearl of the south coast has not missed to be visited. Between mountains and sea, the landscape is simply amazing, rice fields, salt fields, pepper farm, national park, caves, lake and islands.

Large investment have been done in infrastructure, excessive but practical and safe for driving a motorcycle, the major risk being dogs and cows doze off in the middle of the road (already tested, it hurts...). With a large range of accommodation from the simple guesthouse to the luxury resort it is difficult to do not find what you looking for.

Related to the name of Kep said that there was a king named Sa Kor Reach, who had a mighty spell. He put a sleeping spell on a commander at AngKor Thum, than stole the commander’s white horse and fled together with his troop to the Southwestern seaside.

When he took a rest at the seaside, he was overhauled by the commander’s troops, who chased him from behind. Suddenly, he got on the horseback; the horse reared, and made him fall down on the ground together with the saddle. Then, he got on the horseback again and fled away without picking up the saddle, because the commander’s troops almost approached him. So that’s why this area was called ‘ Kep Seh ‘ meaning ‘the saddle‘, nowadays it’s only called ‘ Kep ‘.