One of the most famous pepper in the world come from Cambodia, do you know that?
Kampot Pepper is the most prestigious spices, his flavour is just an invitation to open your sens, the pepper story is written for centuries in Cambodia. With ancestral origins and grown by the Chinese present in the peninsula for a long time. Production known its peak during the French protectorate and pepper product in «cochinchine» was send to France (into the 60s). Production stopped short in the 70s and almost completely disappears during the tragic «Khmer rouge» period. Since the early 2000s, the production restarts and the skill is still present to Kep & Kampot. Pepper harvest is from October to May, according pepper.

*Green pepper is a young pepper, tender, tasty but not «spicy», it is consumed fresh locally, harvested from October to December.

*Black pepper, harvested when the fruit begins to ripen & then dried in the sun.

*White pepper is harvested at maturity and then quenched in a water bath for a maximum of 48 hours to dissolve the pericarp (fruit cover), then it is dried in the sun.

*Red pepper is very rare because it requires a way of harvesting and drying very artisanal. It is harvested when fully ripe then dried in the sun.

Sothy’s Pepper Farm is the place to visit for a complet view and understanding about the pepper cycle. Of course you could also buy directly the golden spice on place and it is a recommendation to avoid the «fake» Kampot pepper (most of the pepper sold on the markets come from Vietnam).

There are several sites between Kep and Kampot. Few kilometers, in direction of Damnak Chang Aeur, along the road for Angkaul Beach is located the closer from Kep. Lights, late in the day, reflected on the salt flats sometimes make magical landscapes.
Despite the beautiful scenery do not forget that working in these places is exhausting and often in harsh conditions for very low wages.
Then the salt harvested is, in major part sold to the cooperative which is located in Kampot and sold for export and on the local markets. 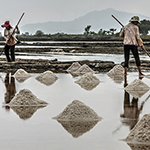 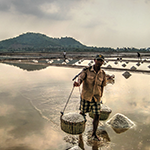 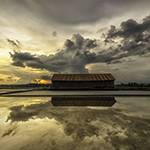 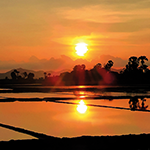 Isolated while a long times due to the difficult access, Angkaul Beach enjoys a road project along the coast to reach the vietnam. The road is still not concreted, making it sometimes a bit difficult the excursions in rainy days and dusty in dry weather but the road is very wide which makes the visit comfortable (even if the last few meters to reach the beach are still in adventure mode). Angkaul beach is quiet and almost deserted beach but do not expect a white sand beach but rather a place preserved from mass tourism.

The main beach is very popular specially the weekend and often deserted during the week. Previously the sand was black but 2 years ago the municipality decided to inject white sand But nature takes its course and the white sand start off again to the sea.
Along the beach is marked by Sela Cham P’dey, a statue depicting a nude fisher’s wife waiting for her husband to return.

Kompong trach city caves, is a series of limestone caves and tubes that have been carved.into a nearby mountain. The roof of a large cave in the center of a mountain has collapsed, making a small, enclosed jungle.
Pagodas and shrines have been built amongst the caves, providing for some excellent photo possibilities. Bring a flashlight and wear good walking shoes. It is not a straightforward route and it may be better if you go with a guide. Set aside the better part of a day for the trip to the caves and come back. You will get «pounced» on by children with torches wanting to show you around, if you use their services don’t forget to tip them a small amount ($1).

Phnom Sorsir caves (also known as White Elephant Cave), There are several caves on this mountain, with a climb to the top well rewarding with stunning views of Bokor Mountain and surrounds. Not far away is the auspiciously located hilltop Wat Chamcar Bei also with spectacular views.

Phnom Chhnork, is a short walk through a quilt of rice paddies from Wat Ang Sdok, where a monk collects the entry fee (1$) and a gaggle of friendly local kids offer their services as guides (don’t forget the guide).
From the bottom, a 203-step staircase leads up the hillside and down into a cavern as graceful as a Gothic cathedral. The main cave contains the remains of a brick temple that dates back to the Funan Kingdom in the 7th century. The brick structure is in excellent condition due to the protection of the cave. The stalactites and stalagmites are growing into the temple offering an impressive visual effect. Look for the rock and stalactite formations at the entrance of the main cave in the shape of elephan’s or calf’s heads.

Phnom Kbal Romeas (Mountain of the Rhinoceros Head), Is Cambodia’s largest known caving complex and its history is just as vast. Deep inside this labyrinth of caves, artifacts dating back to 4500BC were found and are now on display in Kampot Museum. Beginning last century, Buddhist monks built a monastery inside the main dome. Remnants of a shrine and staircase can still be found. The caves played an important role during the Vietnam-American war and was a massive hide out during the Khmer Rouge period for Buddhist, Cham and Chinese Khmer. Each built a shrine, buried deep inside the caves as silent testimonies.
The caves and limestone rock formations are perfect settings for caving, abseiling, via ferrata and rock climbing for beginners organized by Climbodia since 2013.

Rabbit Islands (koh Tunsay), a piece of peace into local life. Of course Rabbit Island isn’t «THE» paradise island with white sand and a tropical transparent sea rather an authentic slice of Cambodia.
No WiFi (at last, bye facebook for few days), no electric network (but generators), no public water network (but it is the also the case in Kep), lie in the sun, read a book, take a leisurely lunch, nap in a hammock, and any of the other things you might expect on a remote beach. If you looking for luxury, comfort or entertainment avoid Rabbit Island but if you have backpacker mind, looking for peacefulness or just playing Robinson Crusoe in basic accommodation this is your place.
Boats depart from the pier located in front of the Kep post office. The journey takes about 30 minutes. It will cost you around $8 per person for the boat ride, around $12 to return after several nights on site and 25$ if you want a «private» boat. The accommodations (price by night between 5$ and 15$) are simple but functional with mosquito net. You will find places to eat at acceptable prices and you will be able to relax with a massage and a nice sea view. It is possible to «discover» the island and go around but take good walking shoes as well as old garment.

Kep National Park is easily accessible, it can be done by foot, motorcycle, bicycle or Tuk-Tuk, the entry fee is $1. The ride is very nice and easy for a family or not, no need to be an athlete to walk the 8 or 9 kilometers of the tour. However you will be lucky if you see there some tropical birds, snakes and other exotic animals. It is more common to observe squirrels, butterflies, monkeys and birds but the view is beautiful and the place very quiet. Some trails «off-road» are indicated if you want to venture beyond the large red park road. The course is shady but the early morning is best to avoid peak heat sometimes hard for the body.
The ‘Stairway to Heaven’ (access behind The Beach House Hotel) trail is particularly worthwhile, leading up the hill to a pagoda, a nunnery and the Sunset Rock viewpoint.